I’ve been pretty quiet about my kitchen since we’ve moved into our new townhouse. The truth is, I was spending very little time in it! (As little as possible, to be honest…) My focus was on getting all the boxes unpacked and first completing the living and dining room.

Once those things were finally finished, I stood back and took a good look at the kitchen. On move in day, it looked like this: 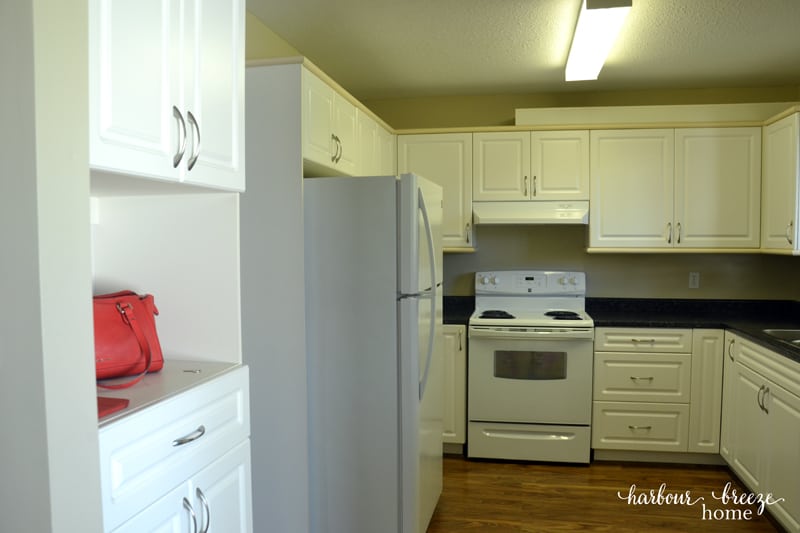 Although I didn’t take any close up shots, there was an odd “trim” around all the upper cupboards. We’re pretty sure it was recycled pink countertopping. That odd feature lasted exactly 1 day. My husband had that removed quicker than you could blink~ which gave it an instant update.

Then, other than trying to stuff all my kitchen items into the cupboards, nothing more happened until a few weeks ago when motivation kicked in.

I was tired of having all my cookbooks hidden in the living room for lack of space, so I turned the whole kitchen upsidedown as I rearranged everything to make a little more sense. One thing led to another (doesn’t it always?), and before I knew it, I had the paint out…

This makeover wasn’t a huge one, but it had major impact on how much I enjoy the kitchen now.

Now they are fresh and pretty with only one coat of Benjamin Moore’s Gray Cashmere (that was left over from my previous Coastal Cottage Office makeover). 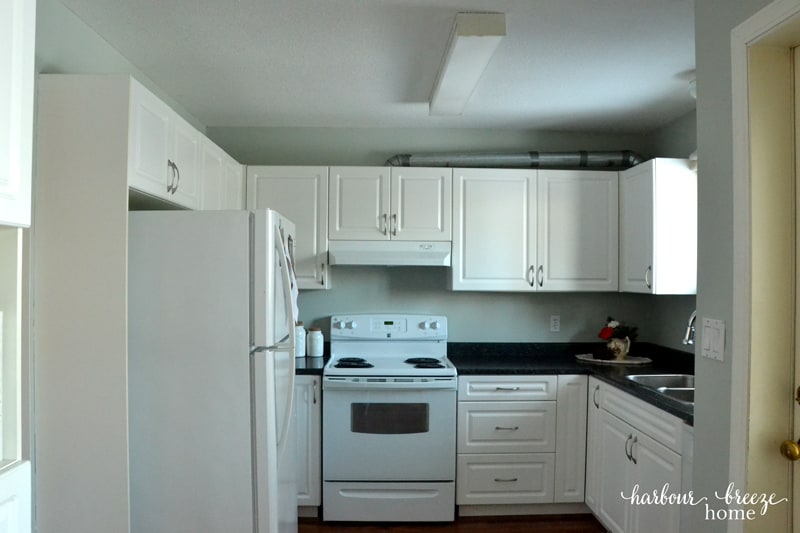 I’m fully aware that the elephant in the room is that vent sticking out of the top of the cupboards. Oh, how we wish the building contractors thought to hide that in the wall when they were building this place. We have plans a-brewing for it, but for now, it’s just hanging out up there adding a little “industrial” flare.;)

The part that totally rocks my kitchen world is this little corner: 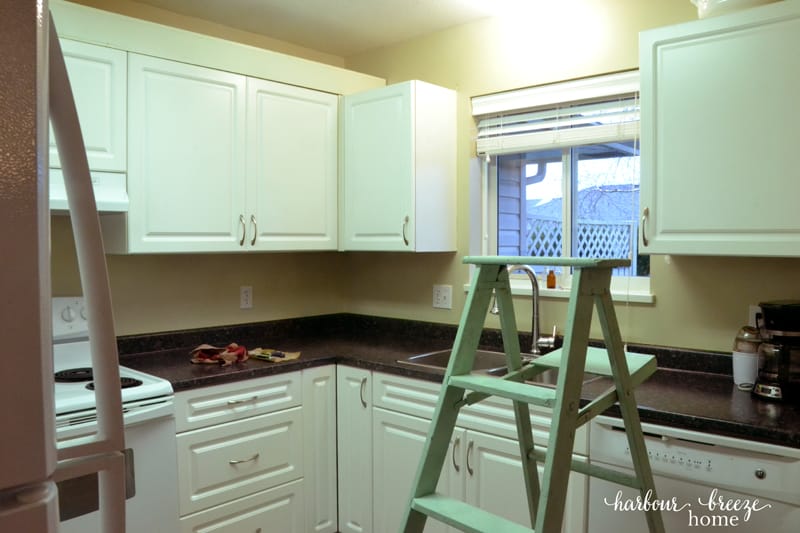 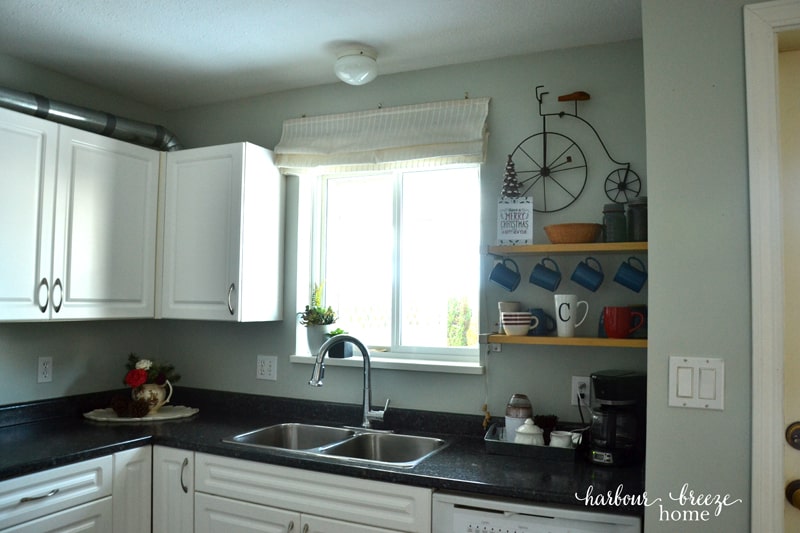 We just love our new kitchen coffee bar!! You wouldn’t believe the difference in the space once we removed that upper cupboard. 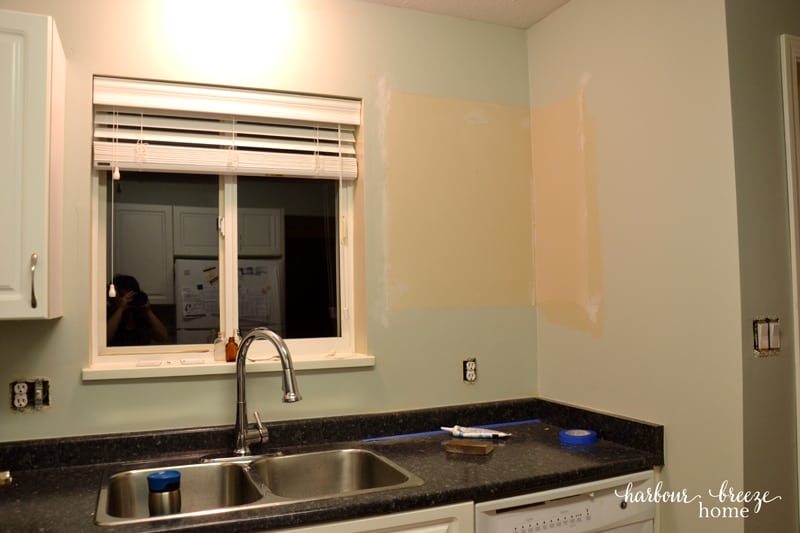 We installed shelves that we had in our previous kitchen (from Ikea), 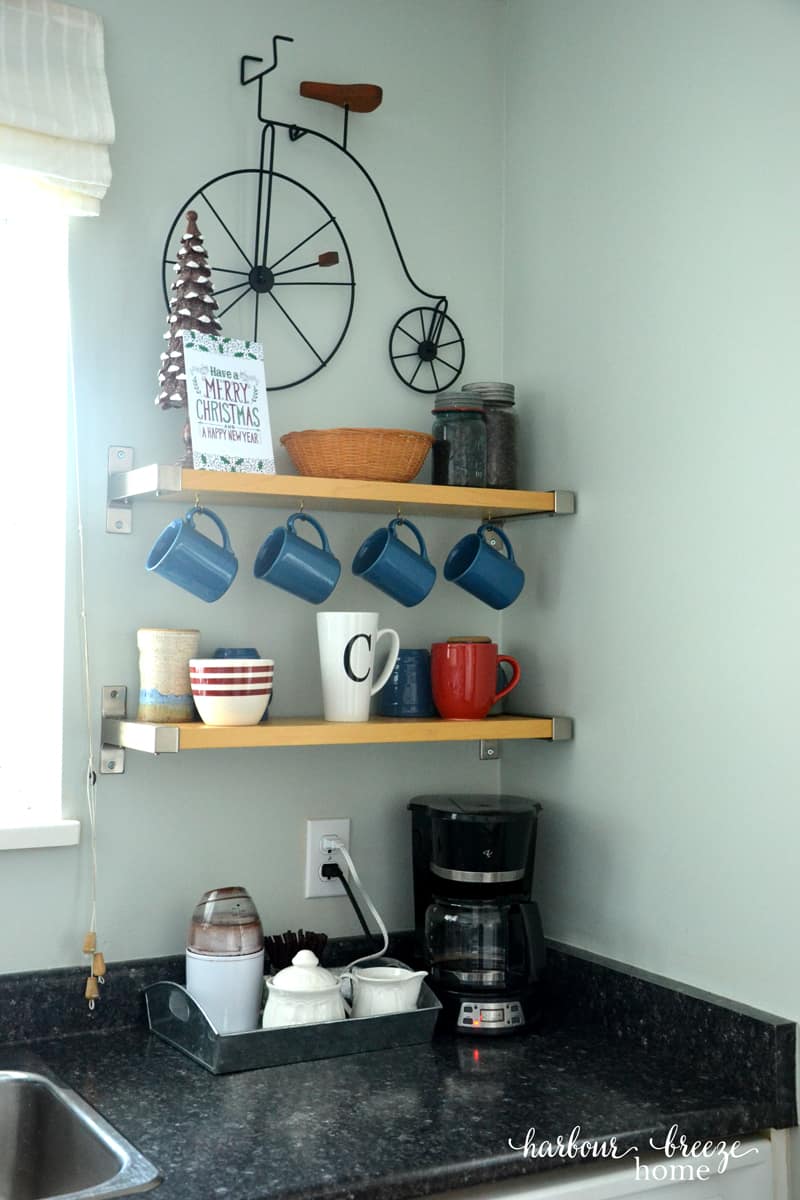 and added mug hooks on the bottom of one. 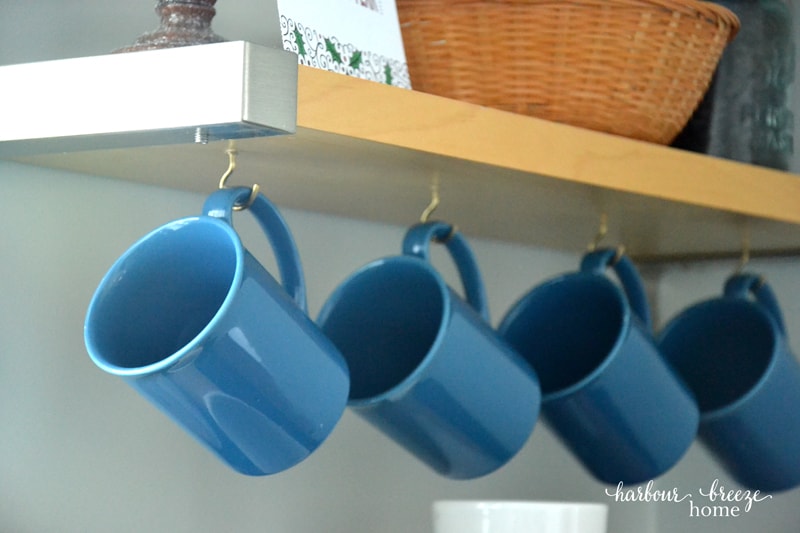 Although I don’t have a picture of the sad old tap that was here when we moved in, I do have the “after” of the gooseneck one we picked up on a half price sale a few weeks ago. 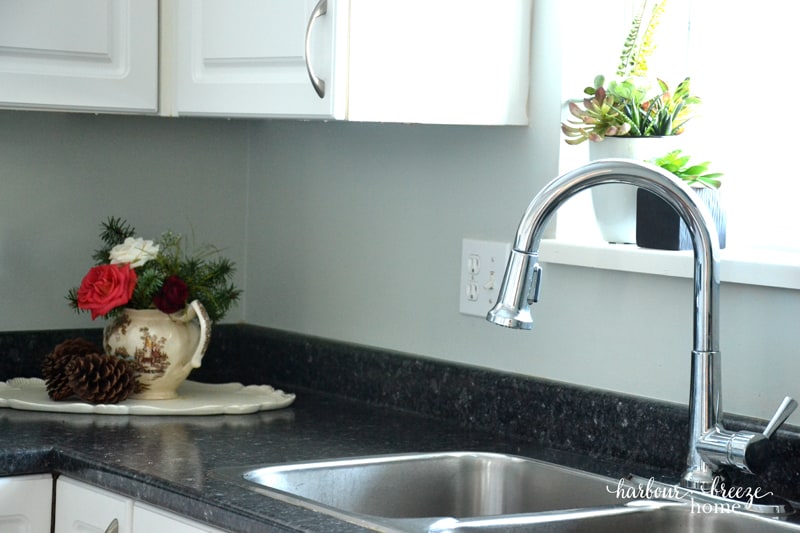 It makes washing dishes so much more exciting!;)

I still have some more plans in the organizational aspect of the kitchen, but for now, I’m enjoying how it’s feeling. 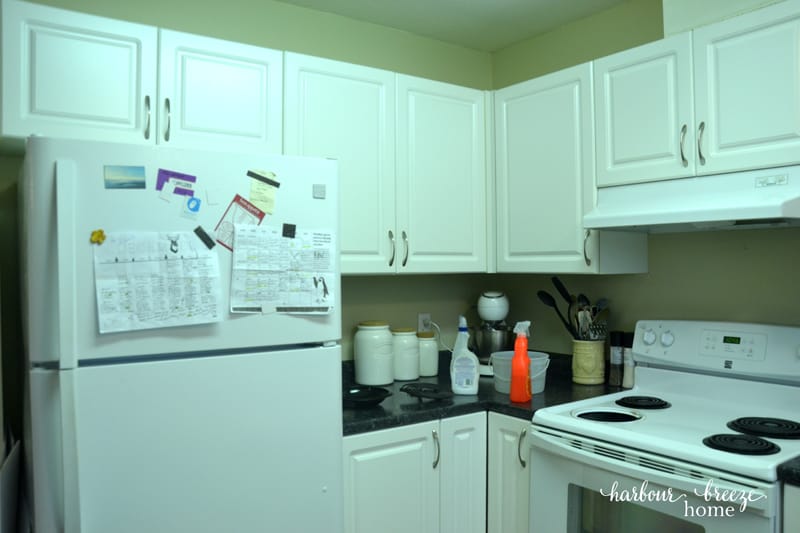 In fact, I just spent a whole day in there baking up a storm. 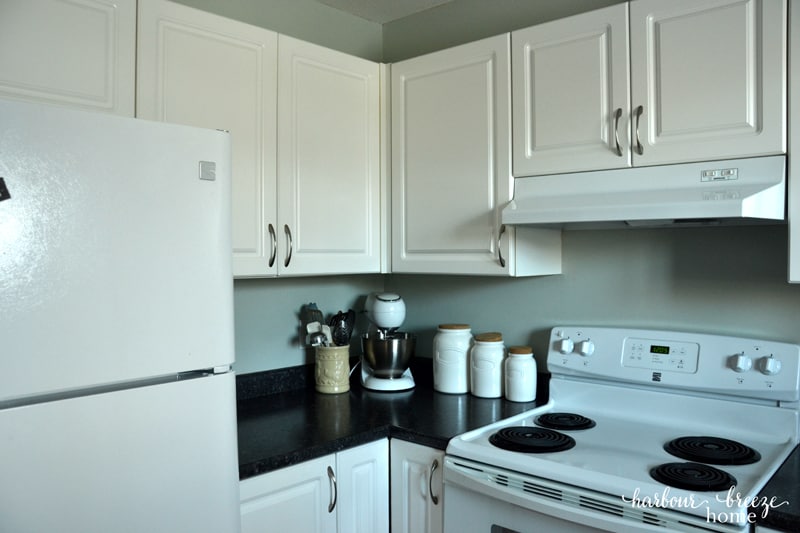 With every pan I pull out of the oven, it feels a little more like “home”. 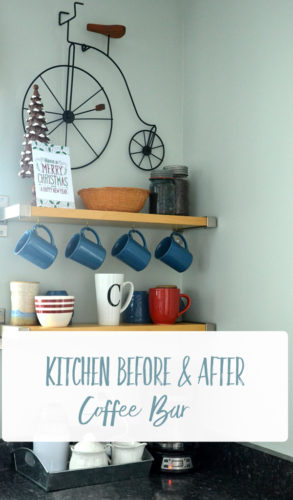 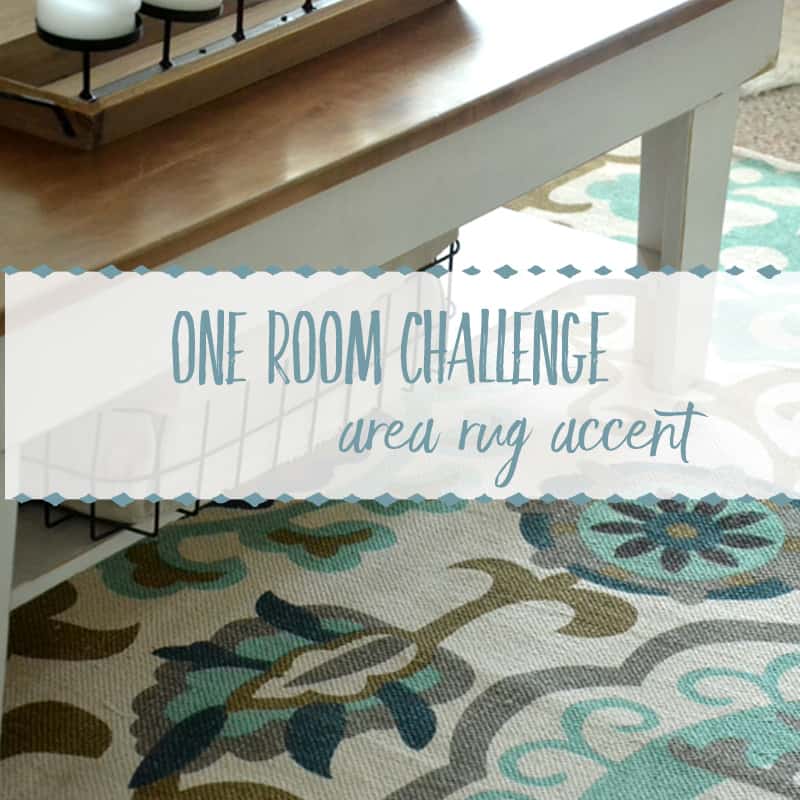