Since the beginning of the year, I’ve been on a mission to develop healthier eating habits. I’ve been researching new recipes and eating more spinach in a week than I previously did in my whole lifetime!:)

This Super Skinny Chicken Alfredo with Spaghetti Squash is a combination of recipes and techniques I’ve learned from others. It’s loosely based on the Pioneer Woman’s Cajun Chicken Pasta which is hands down my favorite. pasta. in the whole world.

This version has a lot of the same flavour deliciousness minus half a gazillion calories!!:) (I don’t know how to give you the accurate calorie count, but trust me, it’s a lot less!).

Much of the calorie saving feature in this recipe is that it’s served with spaghetti squash instead of traditional pasta. Honestly, I’d never even had a bite of it before a few months ago. But, I’m telling you what ~ it’s amazing!

However, if you and your family really wants to go the pasta route, this sauce on real pasta would be scrumptious, too!

How to cook the Spaghetti Squash:

~ Using a knife or fork, poke holes down the center top of the squash and microwave for 5 minutes.

~ Be careful removing it from the microwave. It will be hot!

~ Using a sharp knife, cut open the squash and scoop out the seeds.

~ Brush olive oil over each cut half, sprinkle with salt & pepper and place cut side down on a baking sheet. 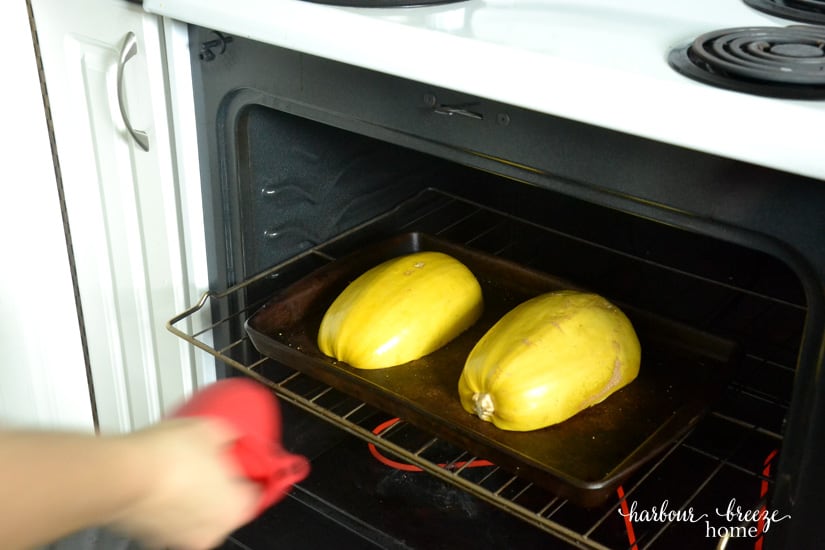 How to make the Chicken Alfredo Sauce: 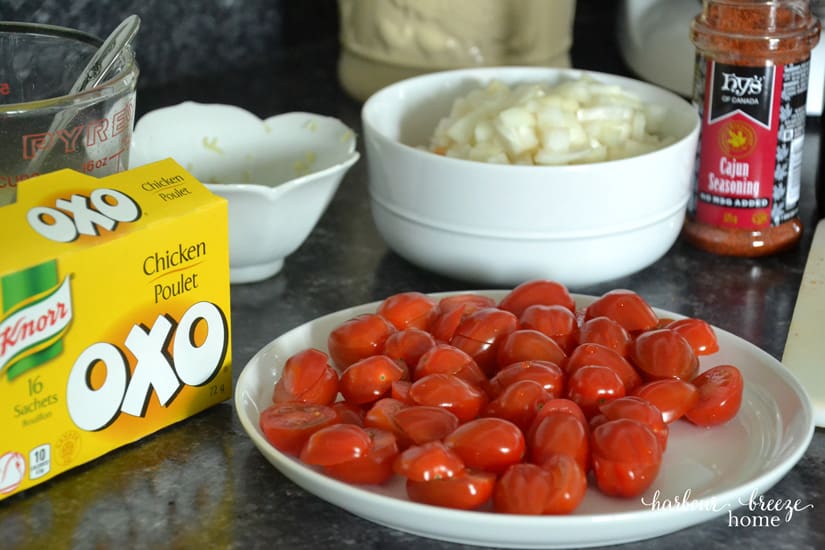 ~ Chop 1 red pepper and one onion. 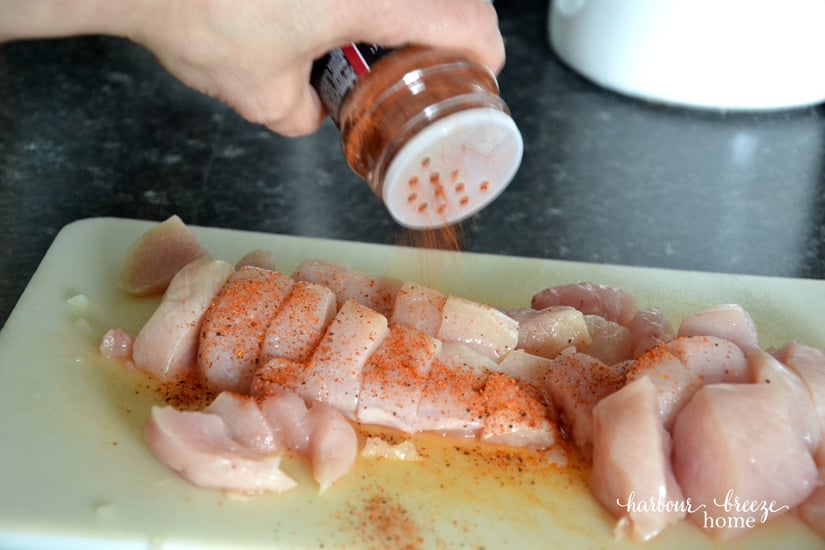 ~ Dice 2 or 3 chicken breasts. Sprinkle with cajun seasoning and rub into all sides of the meat. 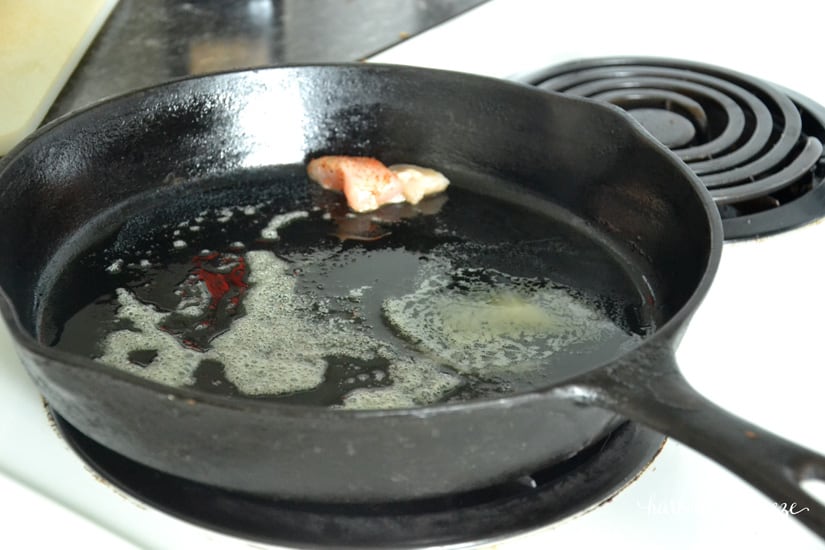 ~ Heat up a cast iron pan and add a drizzle of olive oil and 1 Tablespoon butter. 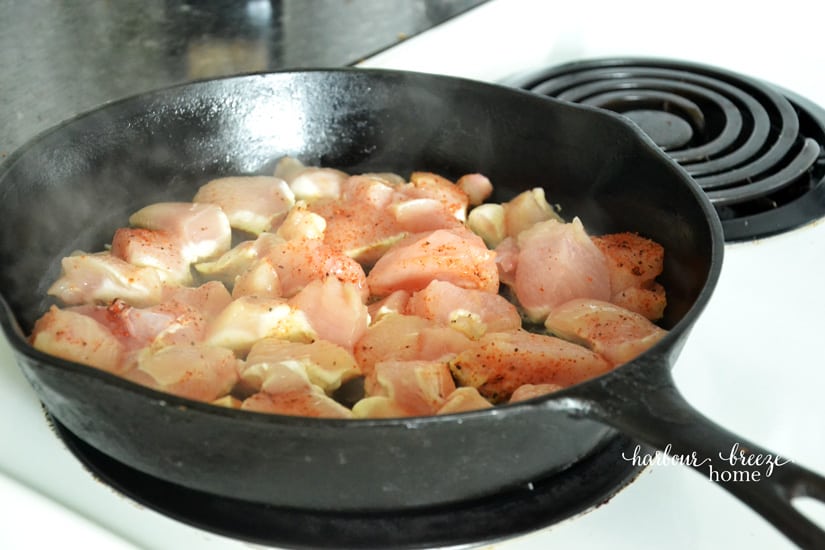 ~ Once hot, add the chicken in in a single layer. Resist the urge to stir the meat and let it cook until it starts to turn white on the top. Then, turn each piece over. 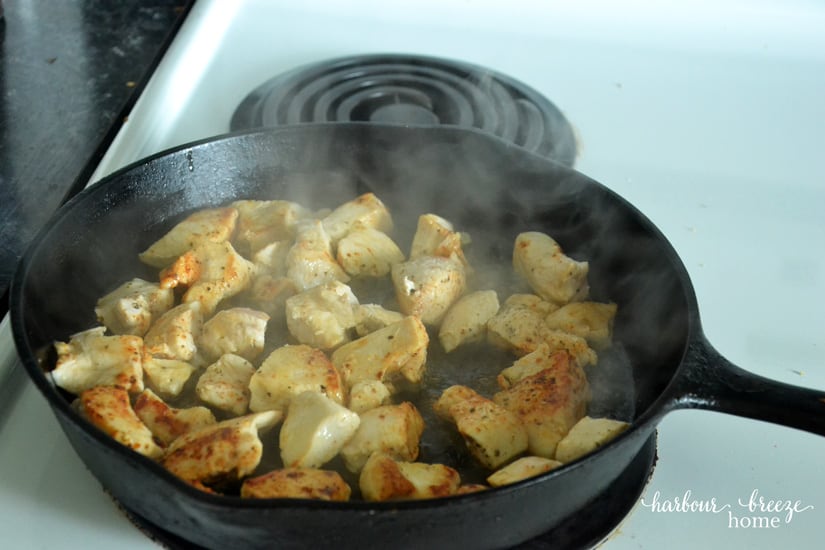 ~ When the chicken is cooked through, remove it from the pan and place it on a clean plate. 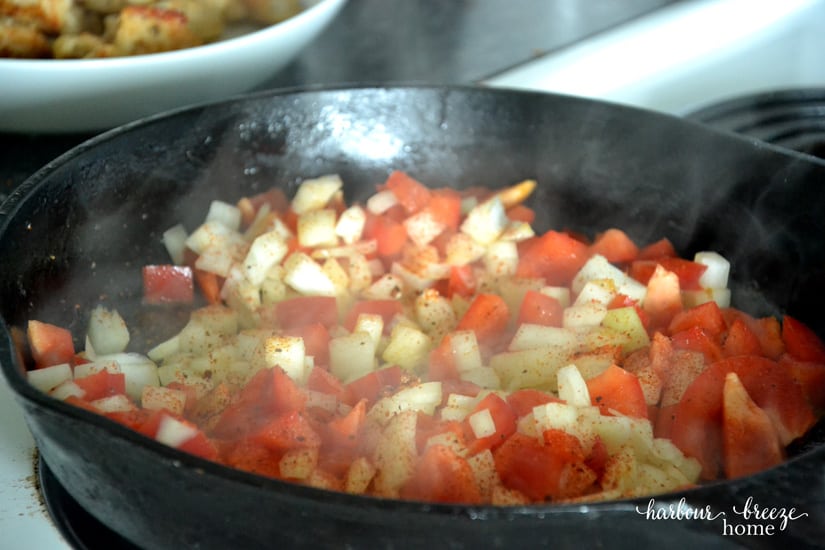 ~ Add the diced onions and peppers to the hot pan and saute until onions start to get clear.

~ Add in the garlic and keep sauteing. Sprinkle veggies with cajun seasoning and salt and pepper. 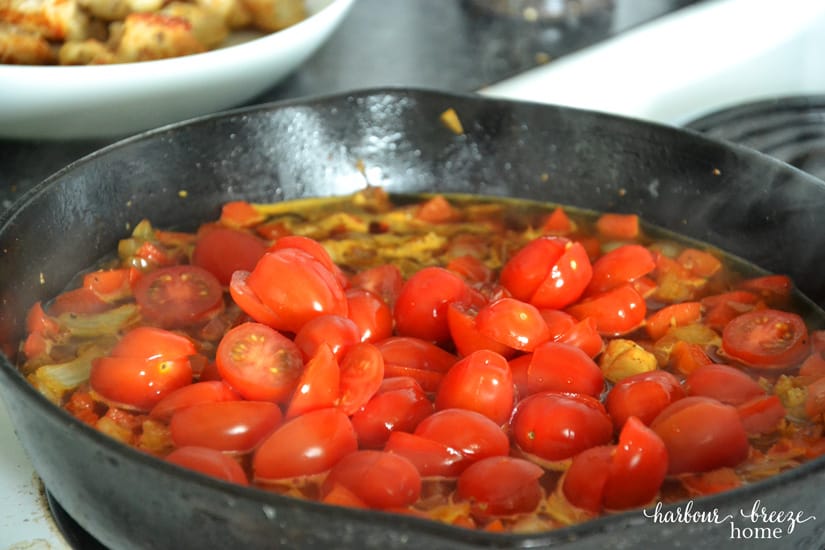 ~ Once the veggies are softened and cooked, add the tomatoes and chicken broth. 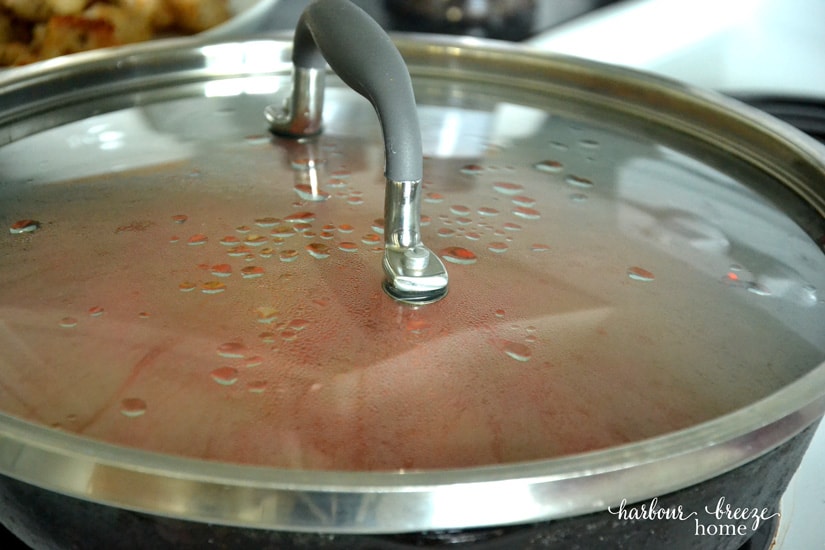 ~ Bring to a boil, cover, and turn down the heat to simmer. Simmer 10 minutes.

~ Remove the cover, turn up the heat, and let simmer for another 10 minutes or until the sauce starts to thicken. 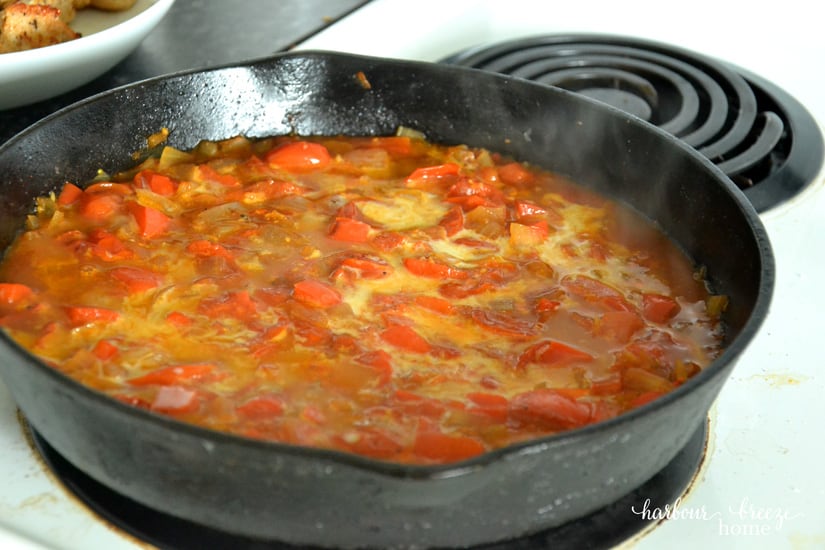 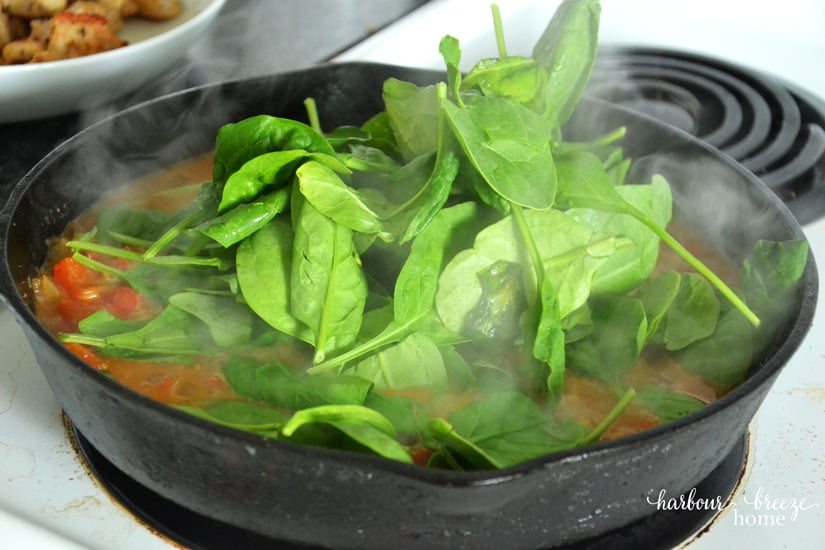 ~ Once the sauce is back up to a boil, add in 2 big handfuls of spinach.

~ Stir into the hot sauce until it is wilted. 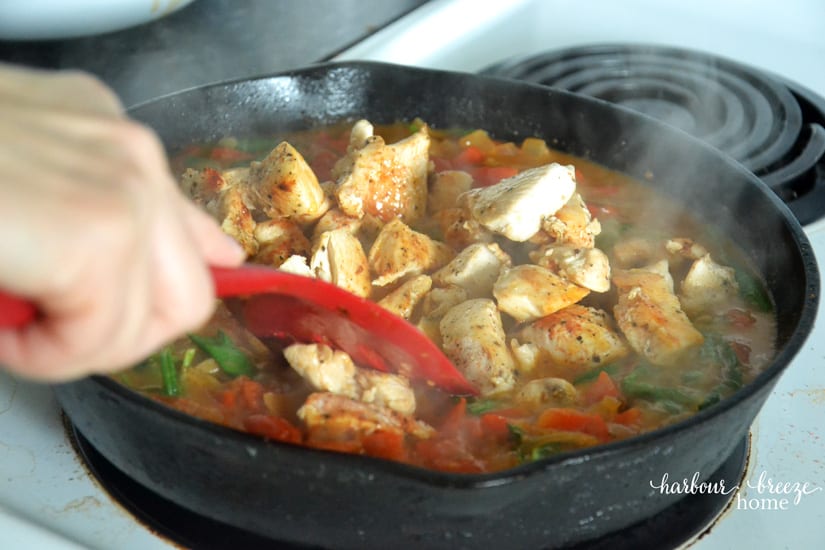 ~ Add the chicken and stir. Let it simmer a few minutes or until the chicken gets nice and hot.

Now back to the Squash: 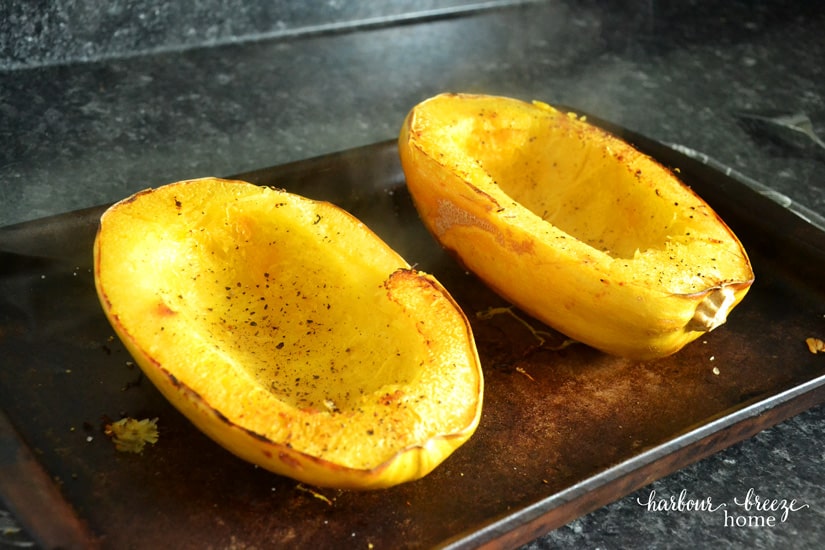 Once the squash has baked for 40-45 minutes, remove from the oven and flip each half over. 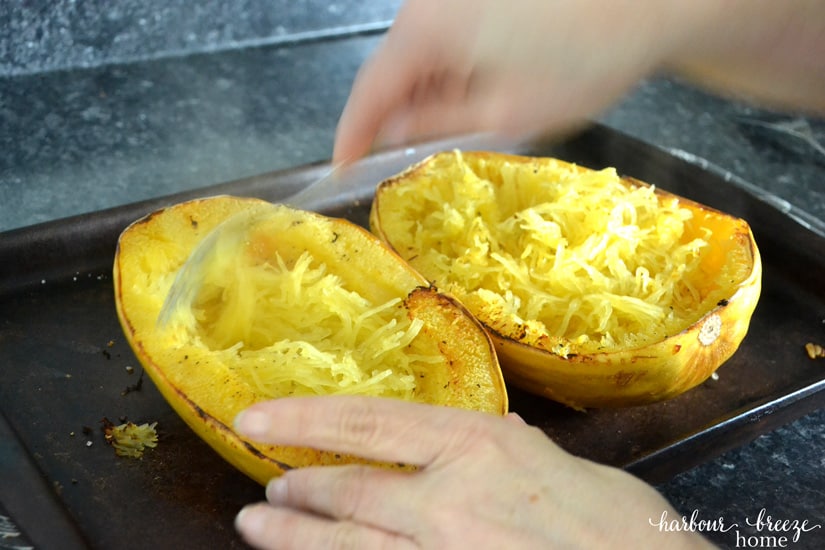 Using a fork, scrape out the squash (it will look like spaghetti strands!) and place in a serving bowl. 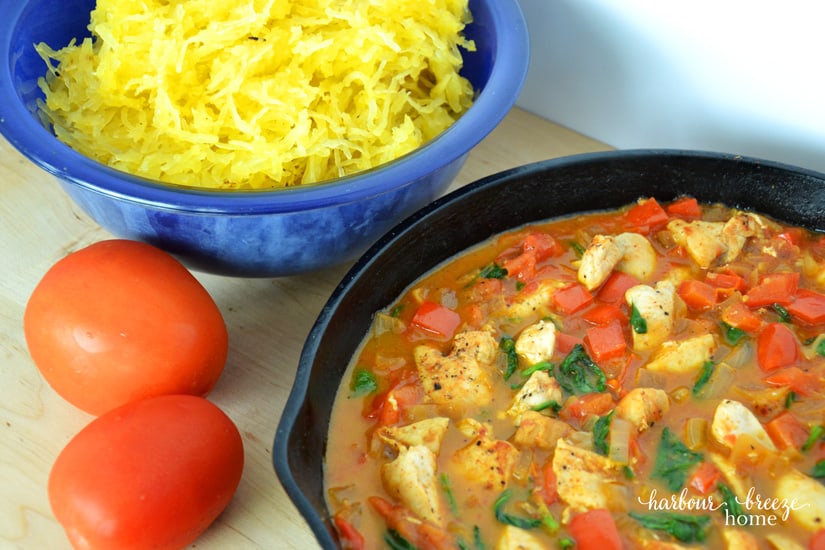 Serve the sauce over the squash.

So yummy (and filling!). 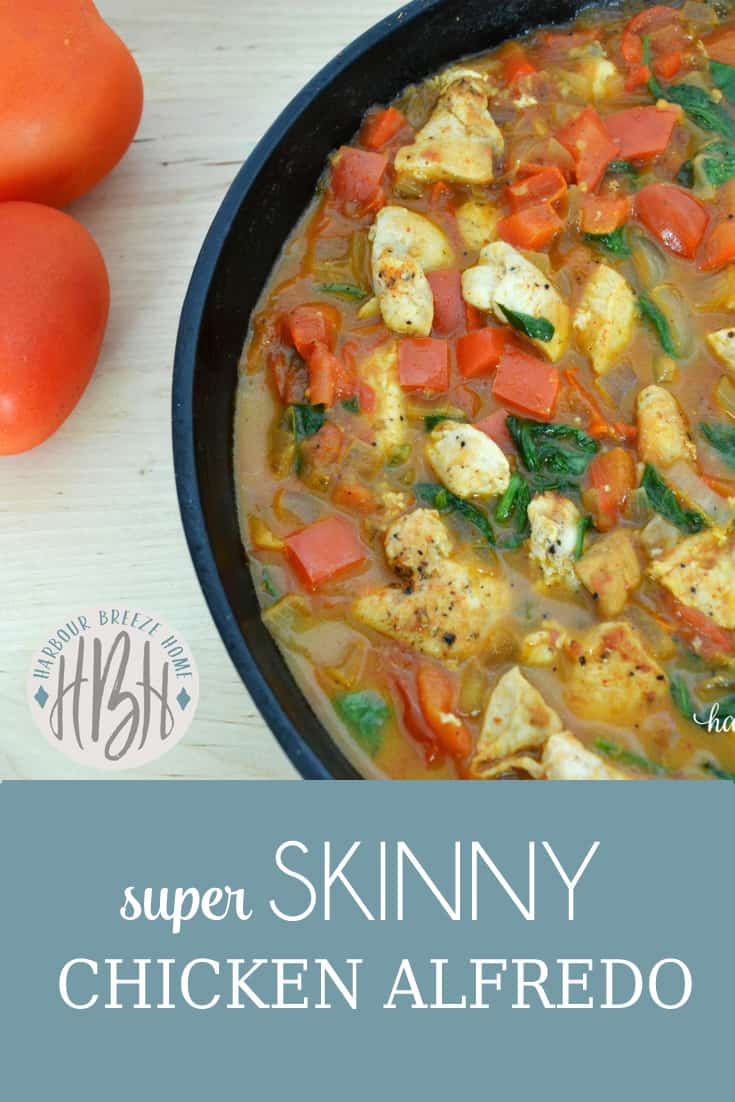 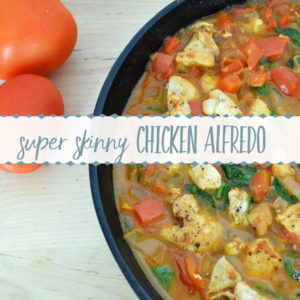 Come on in! I'm Rita Joy ~ an "over 40" wife & mom on a home-making journey ~ seeking to daily enjoy the little things and taking simple steps to live life beautifully. Click here to read all about me

Coffee drinker (served black with a little sweet treat on the side); loves Modern Farmhouse style & sun streaming through an open window; loves to laugh, and her favorite coffee shop date is her husband. Read More…