It’s about the one year anniversary of the beginning of our kitchen remodel story.  It all began right around this time last year…when Spring cleaning was on my agenda!  For those of you who’ve followed this blog from the start, you have already seen this process in “real time”.  But, I thought it would be fun to take a stroll down memory lane for those of you who are just getting to know me and my house.

Our reasons for renovating were two-fold:  Improve functionality, and Inject {Our} Personality

Let me show you: 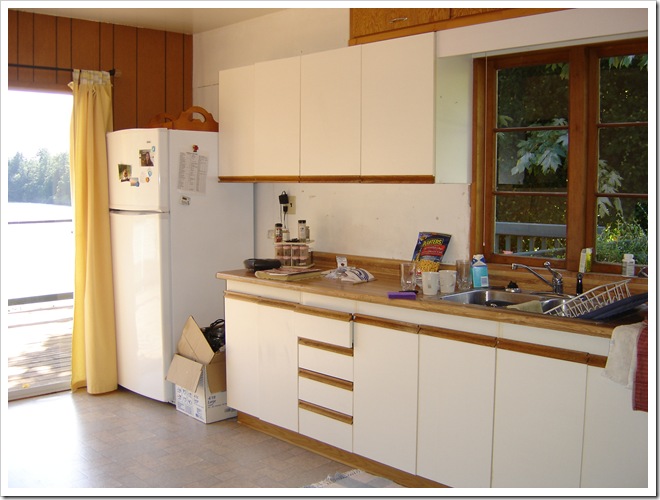 When we first moved in, we found out quickly that the fridge smashed at the end of the wall didn’t work so well…

and the whole opposite wall of unused space seemed such a shame.  {We added in a free standing counter as a temporary fix.} 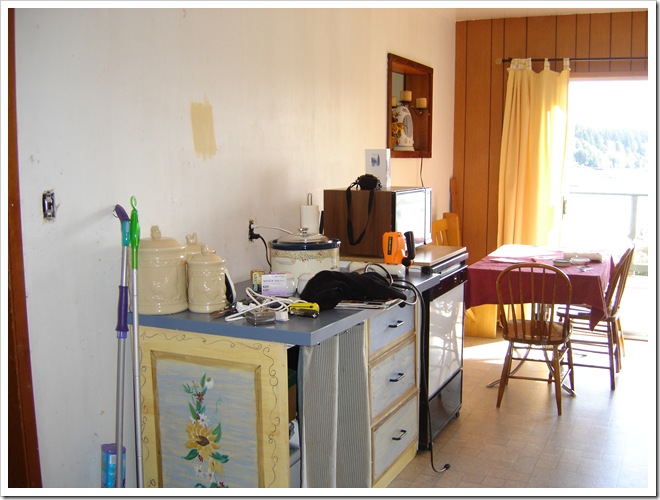 Now comes a bit of a gap in my photographic timeline.  Those days were “pre-blogging” days!:)  So, you’ll have to imagine with me the process of:

That was our “pre-reno reno”.  At that point, things looked like this: 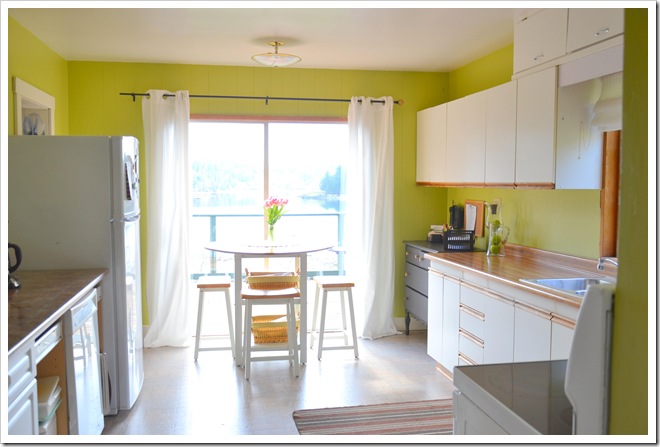 It was much better, but we still had some functionality problems.  The main issue was that  I couldn’t reach my upper cupboards!  They were hung high, I could only reach the lowest shelf. {And, yes, I’m aware that at 5 foot 2, I’m a bit “short”!}  Fixing that problem eventually led to a completely new look…

Here are the highlights:

All the upper cupboards were removed: 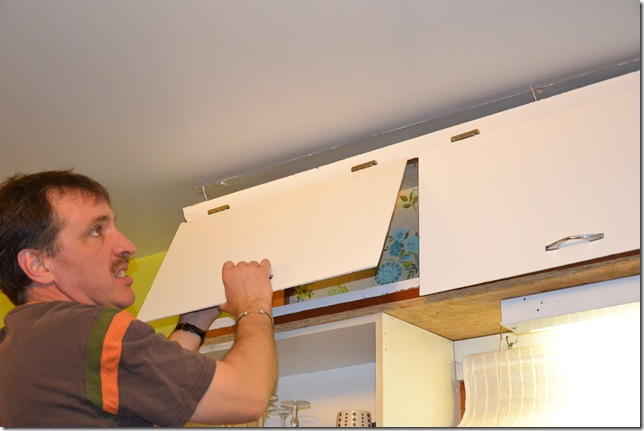 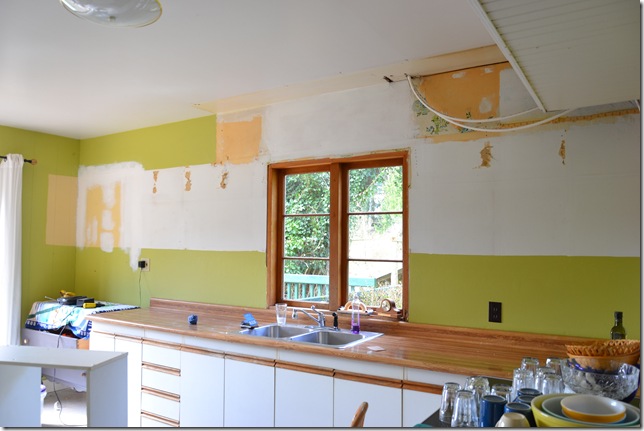 The odd, formally unused corner became both a useful message center and a place for sentimental decor: 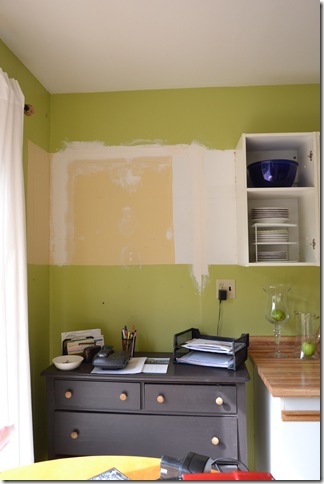 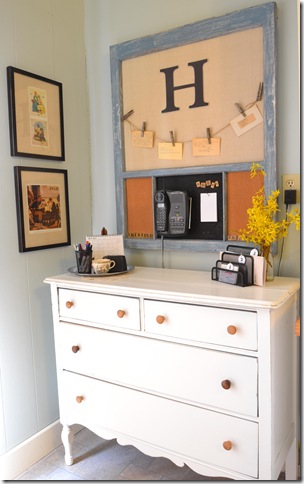 The upper cupboards were lowered,  an extra shelf and crown moulding were added, and the doors were left off. 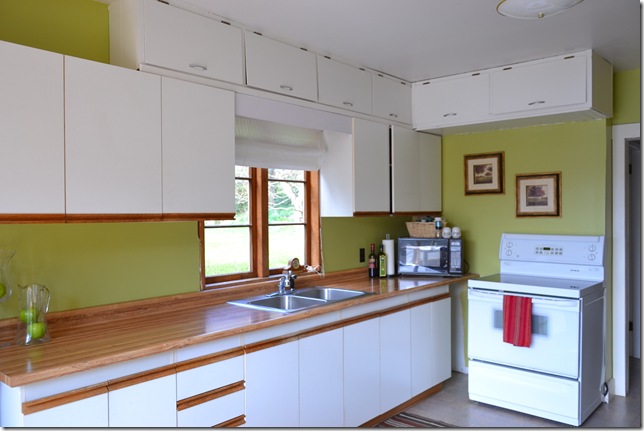 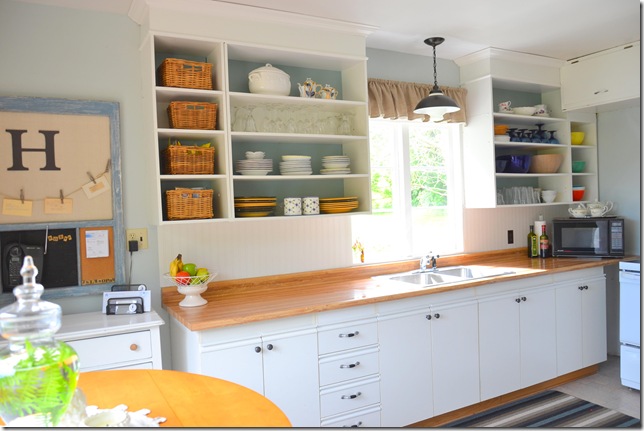 The opposite wall got a beadboard wallpaper treatment, and the missing cupboard doors were given a “fabric doors” : 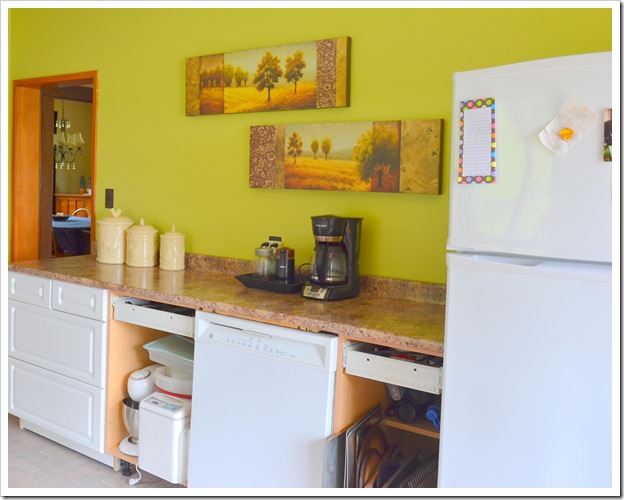 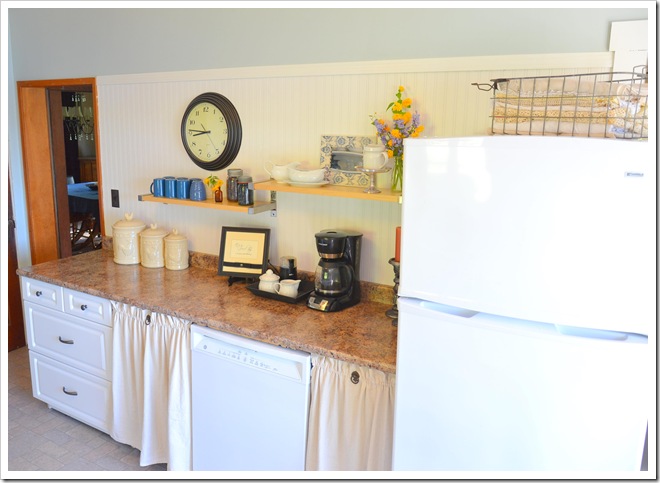 Everyone does renovations uniquely and in their style.  Our renovation decisions were largely based on our budget {we didn’t have much of one}, and the fact that we don’t own our home.   So, we challenged ourselves to repurpose and reuse things we already had.  In the end, the total renovation cost $159.00.  {Yes, one HUNDRED ~ not thousand! ~ fifty nine.}  Little money.  Big change.  I love that. 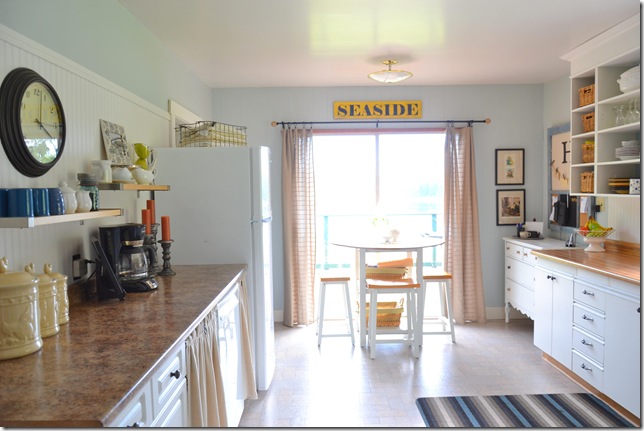 I’m a big believer of “using what you have and loving what you use”.  A whole new look in a space doesn’t necessarily require big bucks…just a little hard work and a some creativity.  Don’t let a lack of budget discourage you from making a space feel and function the way that works for you.

{If you want to see a list of all the projects done for the kitchen, you can find them here.  The new wall color is Designer Gray by General Paint.} 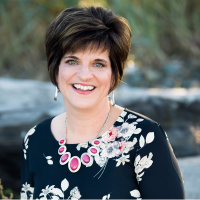 My mission is to share creative and budget friendly ideas to help you DIY, decorate, organize, cook, and get on your fashion & beauty!

After 30 years being a homemaker, I love to share tips & tricks for every day life.

Welcome, friend! I'm Rita Joy. My mission is to share creative and budget friendly diys, home decor, easy recipes, and fashion ideas to help you find joy and beauty in every day life. I'm so glad you're here! Click here to read all about me

Get ideas delivered right to your inbox!

Get ideas delivered right to your inbox!