A friend of ours is holding a  fundraising garage sale/ farmer’s market event for the camp we work at.  I decided to join in on the fun and do a table of handmade things.  I had visions of a table-full of  signs and shabby chic decor.  Alas, time has gotten away on me.  I’m trying to get as much done now at the 11th hour, but reality says I can’t actually finish half of what I first intended.

But, at least the one thing I really wanted to do is done.  It’s called “Margaret’s Verse”.

Margaret and her husband Alf were the instruments God used to start this camp many years ago.  The ministry’s humble beginnings started  with a boat,  meagre supplies, and great faith.  Over time, property became available and the site where Camp Homewood now runs was developed.  It has grown to become a year round facility housing thousands of campers each year.

God has blessed Margaret and Alf with many long years.  Theirs now number in the mid-90s.  Margaret is still a spunky little lady.  Her faith is deeply grounded in His Word and has true life stories of how God has done the impossible-to-us things over her many years of life.

Lately, we’ve begun to think of a verse as “Margaret’s Verse” around here.  For, often during a course of conversation, she’ll reach out and grab your arm (with surprising strength, I might add!), look you in the eye and say, “But you know, 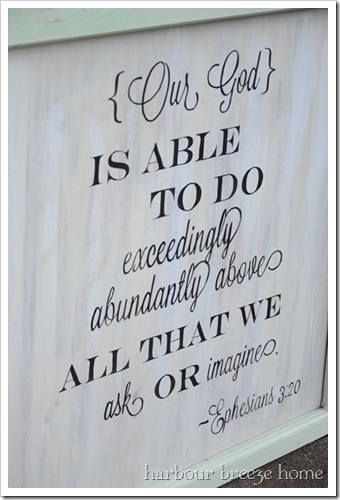 ‘Our God is able to do exceedingly, abundantly above all that we  ask or imagine. Ephesians 3:20’”

You know, that verse applies to almost every single topic of conversation!! 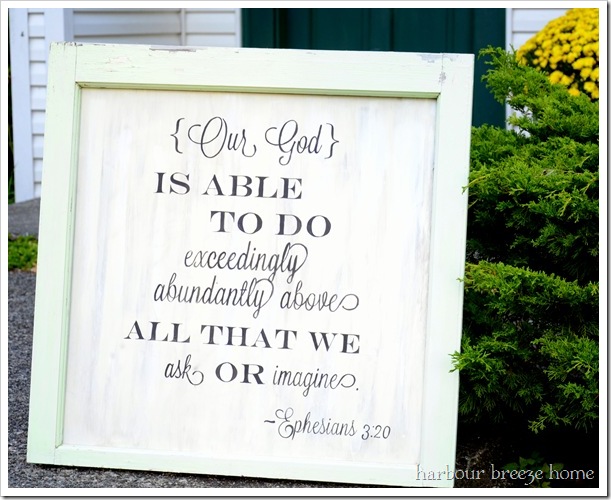 She’s been watching Him work for over 90 years…No wonder she quotes it with such authority!

I’ve also been working on some other signs using antique windows as frames.  {Oh, how I love old windows!} 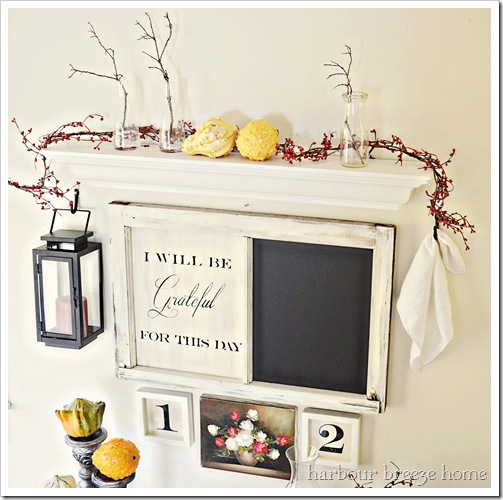 This one was inspired by my sign making hero, Aimee Weaver, and has a chalkboard on one side… 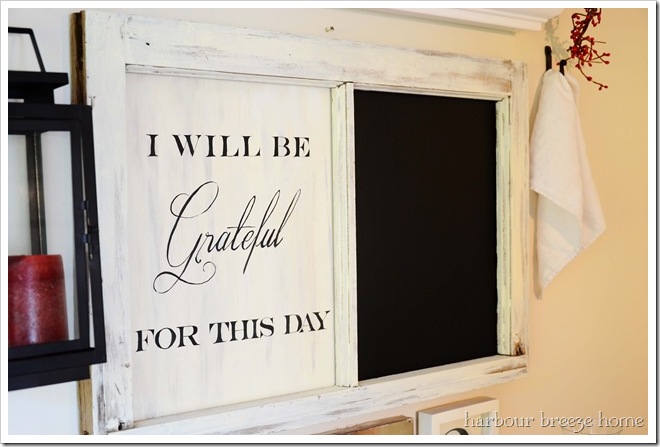 Right now it’s sort of nestled  in my entryway…but, I promise it will be at the sale.:)

I’ve never put such large items in my Etsy shop, but I’ll be working on putting some in there, too, for those of you who are interested in purchasing one online.  Each window is uniquely sized, so no two will be exactly the same.  Once I get some more things listed in {the currently nearly empty!} Etsy, all proceeds for the rest of this month will go toward the ministry of Camp Homewood.

{And if you are in the area the sale will be held this Saturday, September 22, at 451 7th Ave, Campbell River, BC.  We’d love it if you’d stop by and say hi.  I think there’ll even be coffee and cinnamon buns!