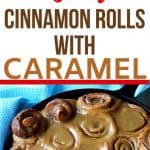 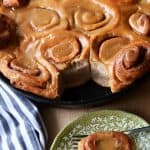 These skillet cinnamon rolls have a deliciously comforting cinnamon flavor baked right in the dough – with a caramel topping drizzled hot out of the oven. The dough can be mixed quickly right in your stand mixer. It’s cinnamon rolls from scratch that you’ll love to bake! 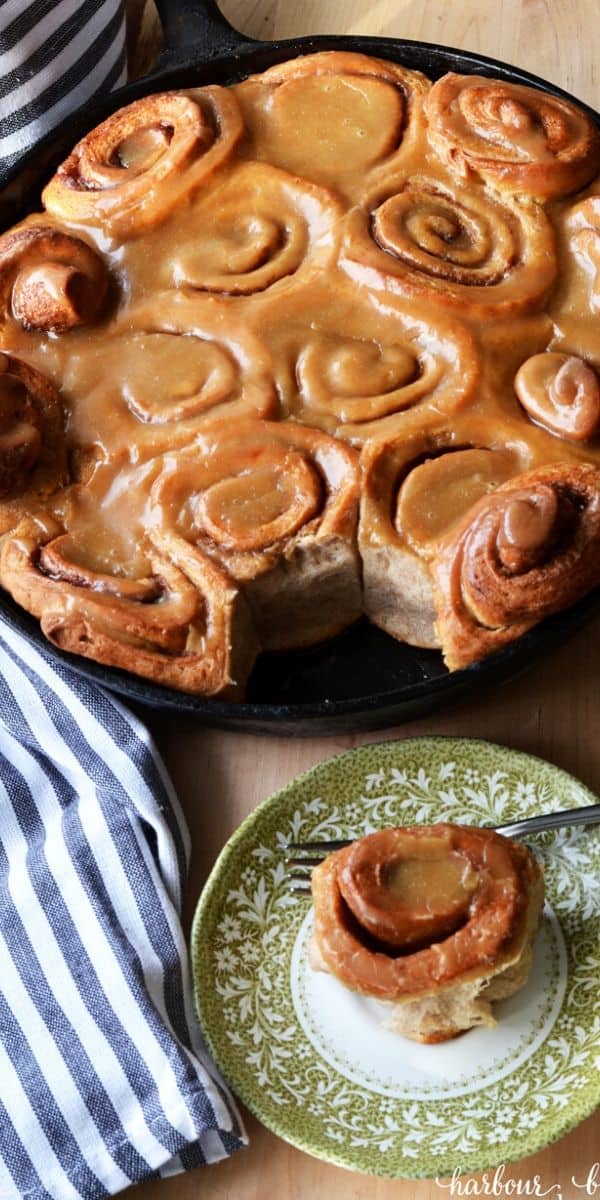 Disclosure: This post contains affiliate links for your shopping convenience.

Our cast iron skillet is of the vintage variety.

Discovered deep in a basement corner, it was rusty and looked destined for the junk heap. But, having read the benefits of cooking with cast iron, I took it home and did some research.

I found that taking care of it properly and seasoning it with oil and heat, we could restore it and use it.

We did, and we have!

In fact, I reach for that old cast iron skillet nearly every day in our home. I just love how it browns meat so well, and adds such yummy flavor to foods. (If you are looking for a cast iron skillet, this one is similar to ours.)

I recently came upon a bread recipe for cast iron skillets, and decided to modify it to see if I could make some cinnamon buns with it. They turned out so delicious!

This recipe is a combination of a cinnamon swirl bread recipe and my sister-in-law’s yummy caramel topping for cinnamon buns. I had so much fun experimenting with this. Cooking with cast iron always makes me feel like a “homesteader”! 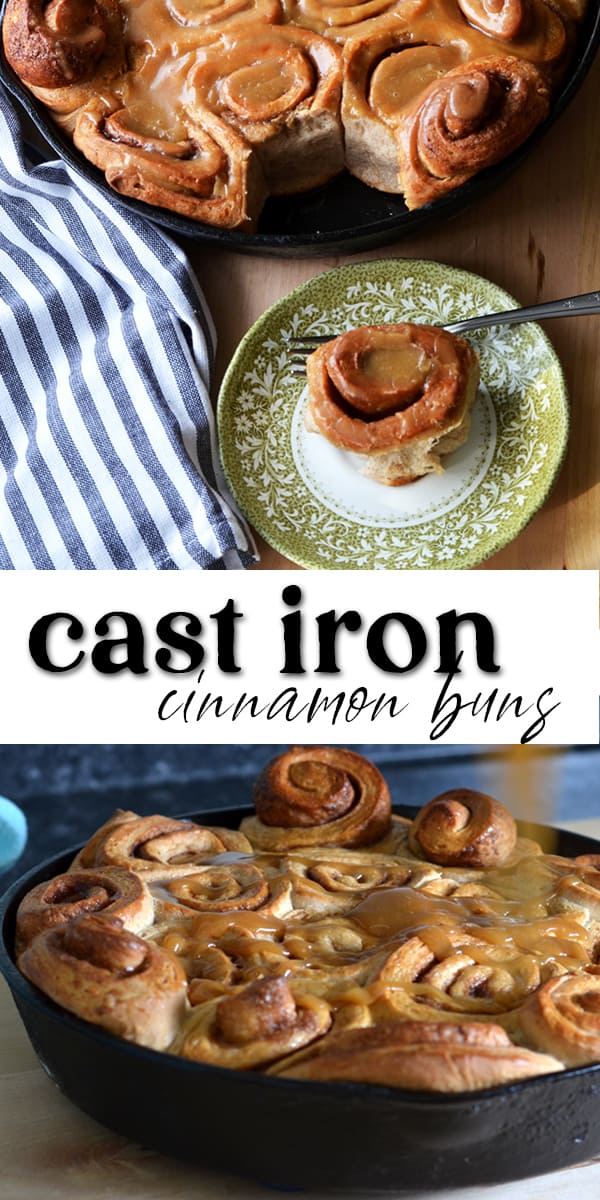 How to Make Skillet Cinnamon Rolls with Caramel Topping

Pre-heat the oven to a low temperature (225 degrees).

As I was mixing up the dough, I pre-heated my oven to a low temperature (225 degrees). Since our house tends to be cool, I like to have a warm – but not hot! – oven to let my dough rise in.

If you try this little dough raising trick, be sure you do not have your oven too hot or it will kill the yeast. You just want it to be cozy warm – as if the dough was set beside a warm fire in a fireplace.

Once the oven has reached 225 degrees, turn it off and leave the door closed.

The dough for this cinnamon  bun recipe can be made in your electric mixer!

I was thrilled to read that this dough recipe could be done with the convenience of the dough hook on an electric mixer.

Whisk milk, melted butter, sugar, water, and yeast together in a 2 cup liquid measuring cup until the yeast dissolves. Whisk flour, salt, and 2 teaspoons cinnamon together in a bowl of a stand mixer.

Using the dough hook with mixer on low speed, slowly add milk mixture and mix until dough comes together, about 2 minutes.

Increase speed to medium and continue to mix until dough is smooth and elastic. It should pull away from the sides of the bowl but stick to the bottom.

Once the cinnamon roll dough is mixed, transfer it into a lightly greased bowl, cover with greased plastic wrap, and let rise until doubled in size – about 1 hour. 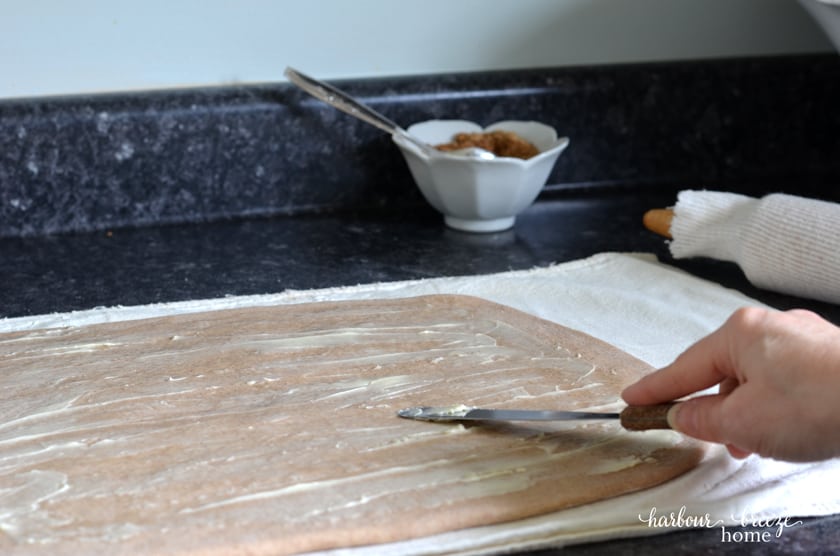 Transfer the risen dough onto a lightly floured surface and roll out.

I use my Grandma’s pastry cloth and roller sleeve for any rolled dough project. (Here is a similar product.) It makes cleanup so much easier and prevents the dough from sticking to my counter!

Roll out the dough into a 16 by 12 inch rectangle with the long side facing you.

Brush 2 tablespoons melted or softened butter over the dough, leaving a 1/2 in border at the edges. Sprinkle the cinnamon and brown sugar over the butter. 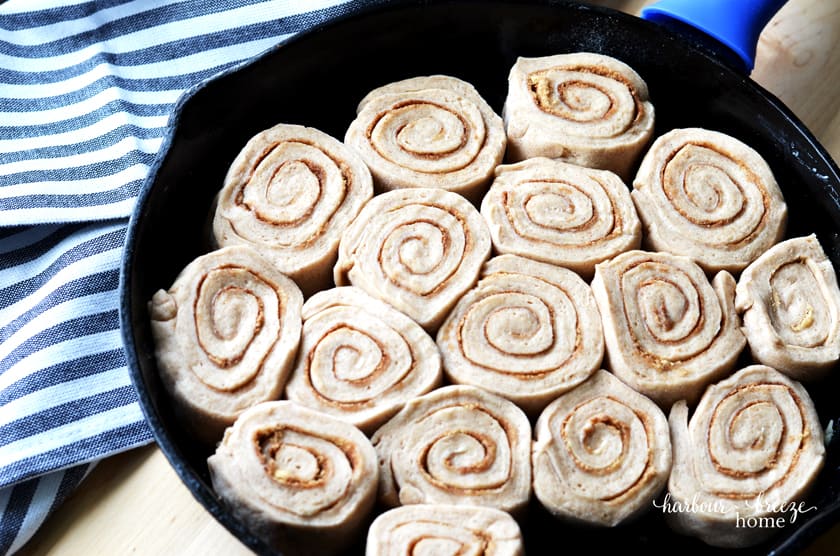 Place the 16 cinnamon rolls into the skillet. Cover with greased plastic and let rise until doubled – about 45-60 minutes. 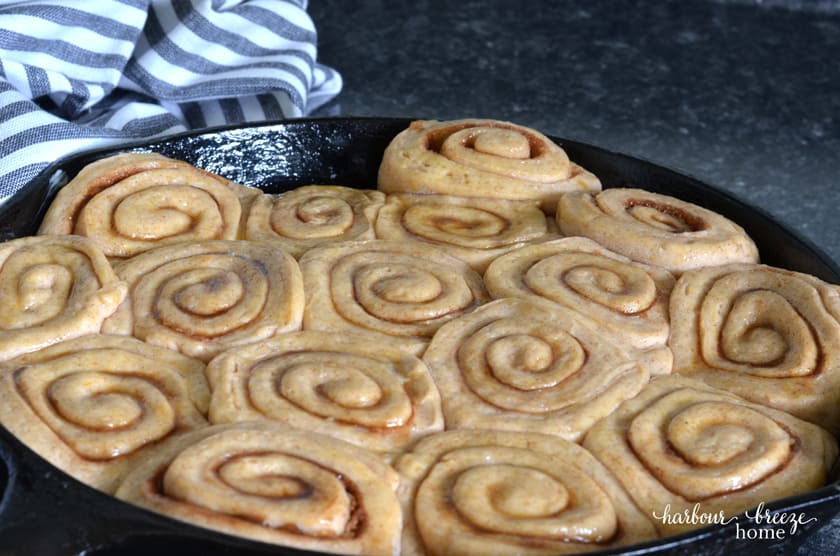 Once they are doubled in size, preheat oven to 325 degrees.

While the cinnamon rolls are baking, prepare the caramel topping.

For a thick layer of caramel topping (as is shown in the finished picture), make this full recipe. If you would prefer just a drizzled glaze, cut the recipe in half.

To make the caramel topping, place the following ingredients in a sauce pan:

Boil the ingredients together until the sugar dissolves completely (about 1-2  minutes). 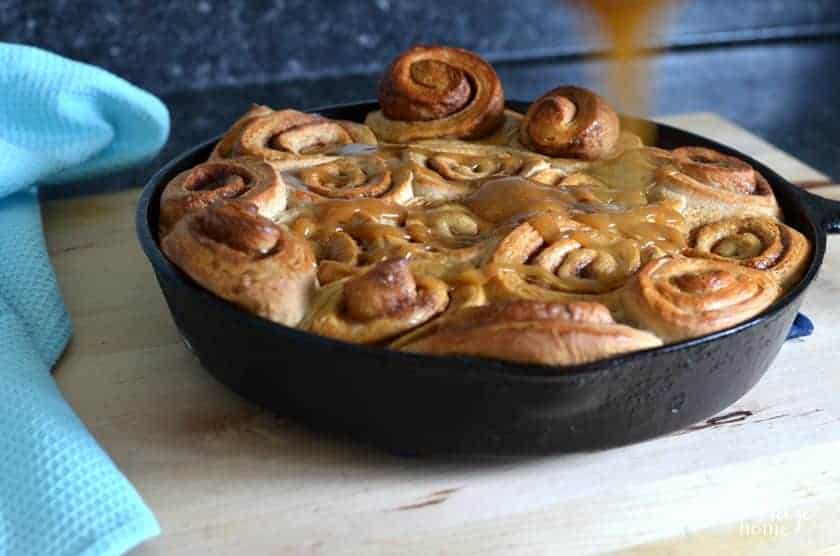 Immediately after pulling the cinnamon buns out of the oven, drizzle the caramel sauce over the top.

Then transfer the skillet to a wire rack and let cool for 10 minutes. Remove rolls from pan and let cool on wire rack, or serve warm directly from the pan.

They are SO DELICIOUS right out of the oven!

For more homemade bread recipes and tips, check out:

To make the caramel topping, place the following ingredients in a sauce pan: 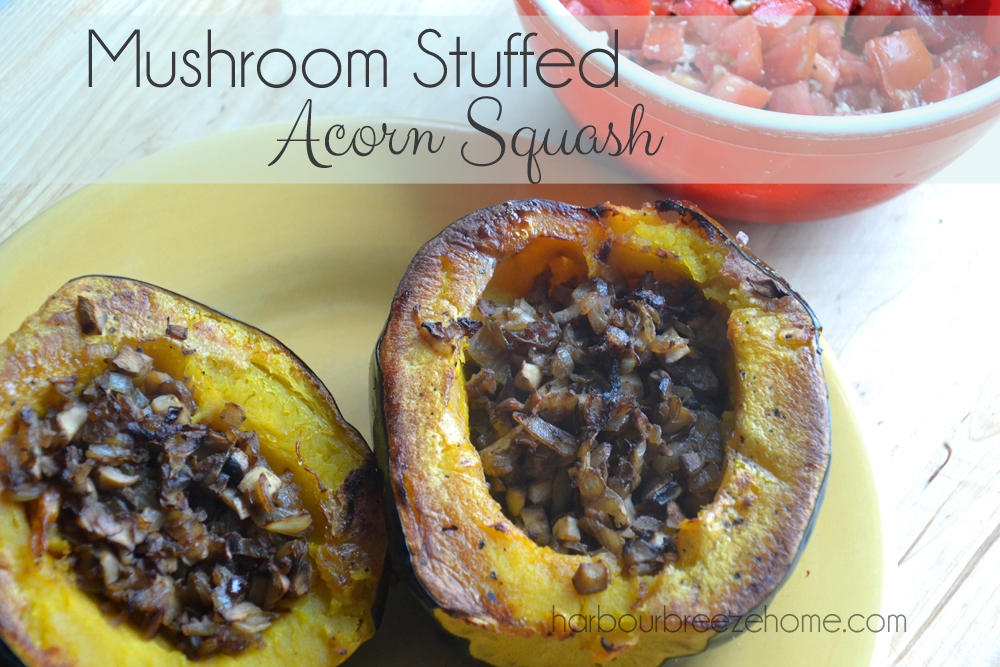 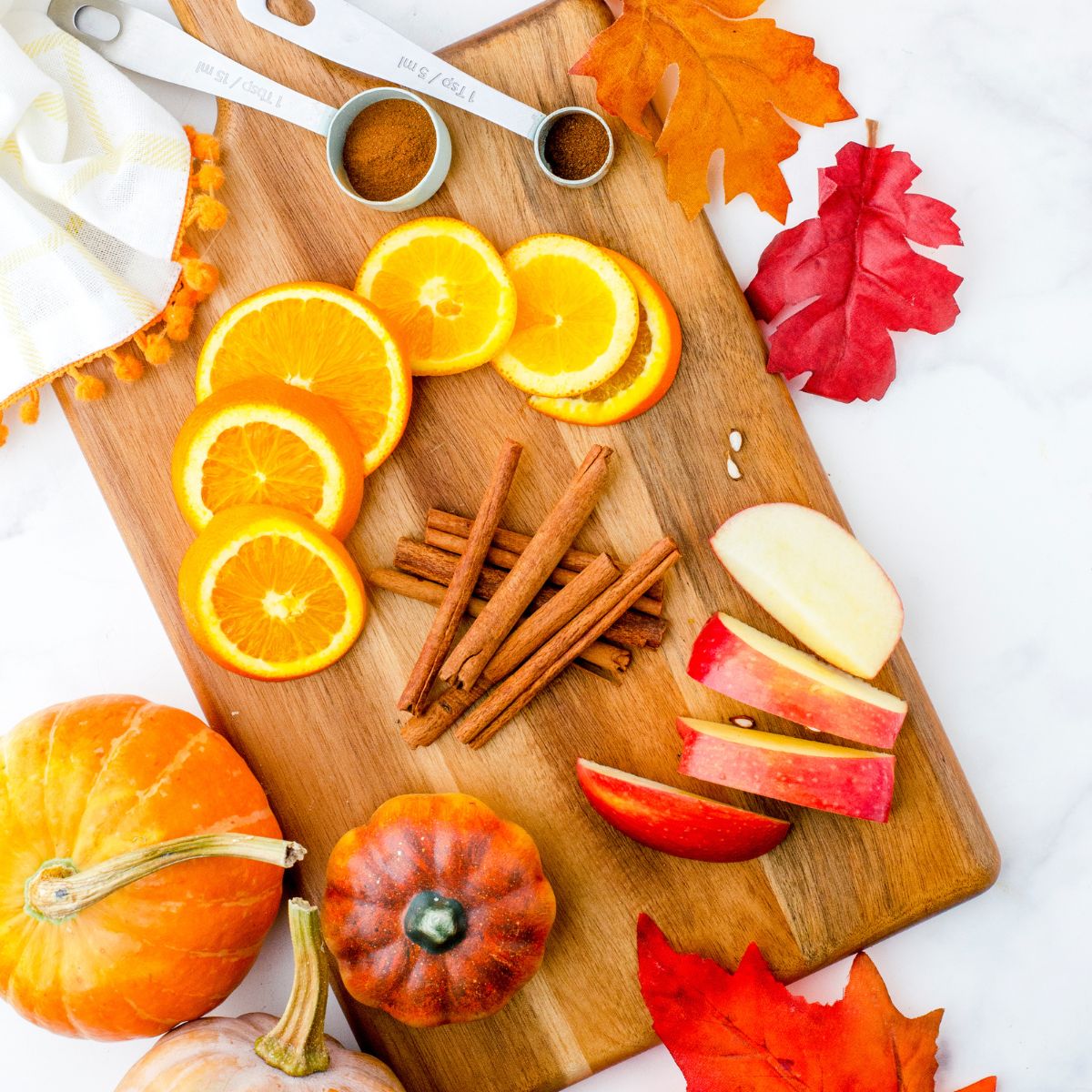 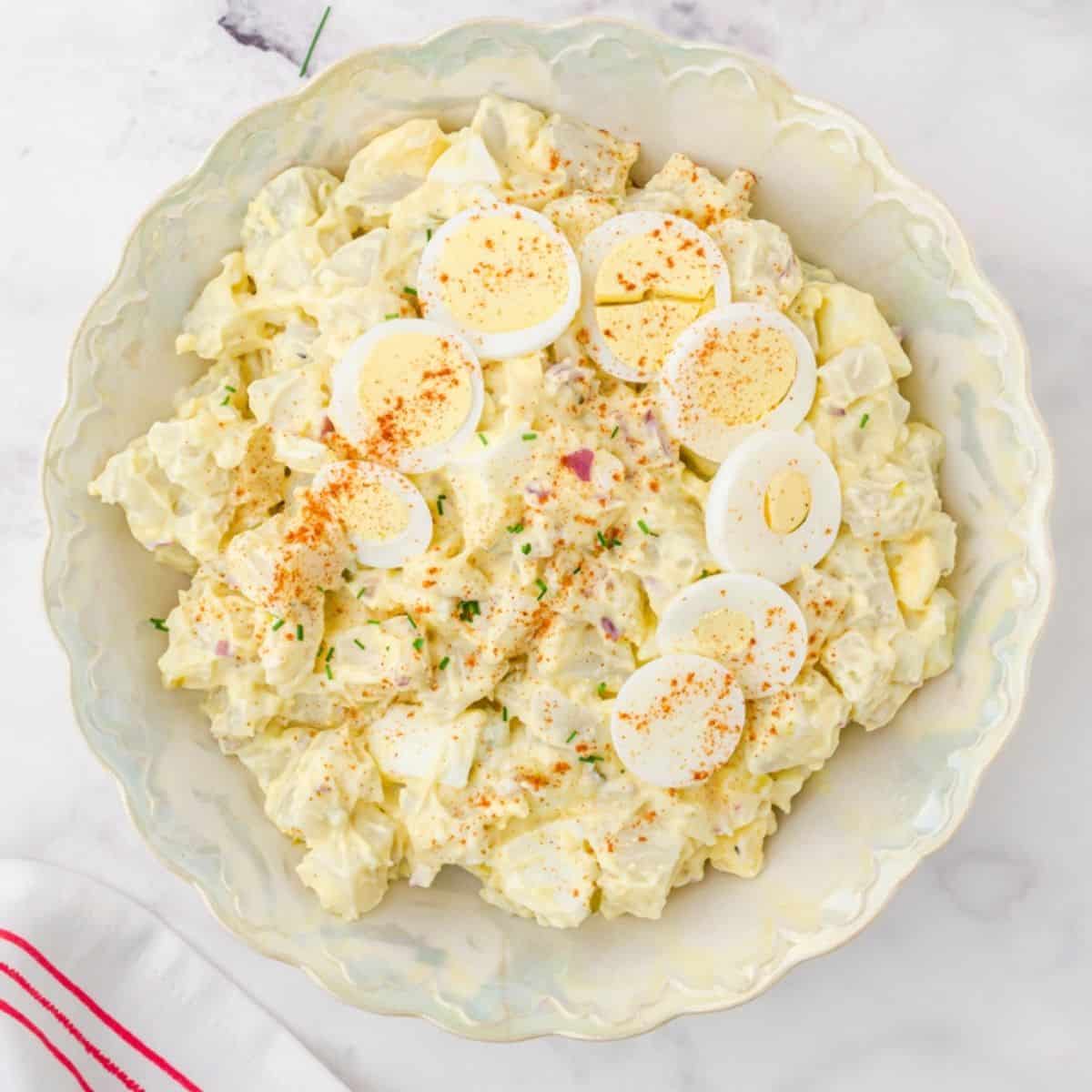